The manner in which metal oxide and ceramic powders consolidate and compact under dynamic loading is not very well understood. While the mechanisms of compaction and consolidation in metal and alloy powders under dynamic loading have been investigated, the model produced cannot be applied to that of metal oxide and ceramic powders. These brittle powders require significantly larger (order of magnitude) pressures to achieve full consolidation compared to that of their metal and alloy counterparts. Working to address this issue, the High Strain Rate Laboratory at Georgia Tech is gathering data on the dynamic densification process of a model brittle powder:  cerium dioxide.

Cerium dioxide is a lanthanide metal oxide powder. It is often used as a surrogate for the study of brittle powders exposed to extreme conditions, such as high velocity impact and shock loading. In this study, cerium dioxide powders of two particle sizes (nominally 1 and 10 μm) and three green densities (32.5%, 55%, and 65% TMD) are shock compressed using gas gun impact and their particle and shock wave velocities are measured using optical velocimetry techniques. The velocity data collected is used to describe the Hugoniot of the shocked cerium dioxide powders and develop an improved P-α compaction model, building upon prior studies at Los Alamos National Laboratory [D. A. Fredenburg, et al, J. Appl. Phys. 115, 123511 (2014)].  The compaction model and equation of state produced will be used to help simulate experiments fielded on PHELIX at Los Alamos National Laboratory to gain a greater understanding of brittle powders exposed to shock loading. 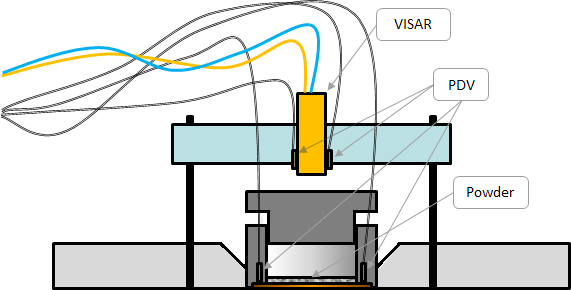